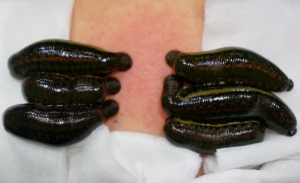 The term HIRUDOTHERAPY was derived from the Latin word for leech – HIRUDO. All leeches belonging to Hirudo medicinalis species can be applied in hirudotherapy. Leeches Hirudo Verbana bred in EURO-BION’s laboratory belong to this group.

THE USE OF MEDICINAL LEECHES

There are not many of them, it should be however remembered that:

Leeches, including medical leech Hirudo medicinalis, are dangerous parasites characterized by an insatiable appetite. They have an inborn instinct to bite everything that has a temperature above 33 degrees centigrade, contains arginin (an amino acid) and a physiological solution of sodium chloride. Aggressive nature of leeches has been subject of numerous metaphors, parables and folk proverbs. It might however happen that a leech will simply refuse to bite. What might be the reason behind such behaviour? Let us try to analyze the potential factors triggering such behaviour in order exclude as many of them as possible.

The procedure of leeching is not a very complicated one provided it is conducted by a person familiarized with the theory and practice of hirudotherapy.

According to the traditional folk medicine the amount of leeches used in the hirudotherapeutical process should follow the proportion: one leech per kilogram of body weight. Nowadays this proportion is treated with reserve since lesser amounts of leeches proved to be equally effective. The total amount of leeches used in treatment is now established based on factors such as age, gender, type advancement and duration of the medical condition, patient’s temperament, body posture, personal attitude towards leeching as well as seemingly irrelevant factors such as season and weather conditions.

During single hirudotherapetucical session 2,3,5,7 or 9 leeches are attached (in isolated cases 10 or 20), sessions are followed by breaks lasting from 3 to 5 days. One session takes from 15 to 90 minutes (on average 45 minutes), its duration is determined mainly by age, gender and site where the leeches are to be attached. In justified cases, when the medical condition is serious and treatment brings significant improvement, the hirudotherapeutical cycle might be repeated (two or three times) in 3 to 6 months. The amount of leeches used in therapy as well as duration of sessions and breaks between them is established individually every time the patient begins a new hirudotherapeutical cycle. In some cases, the course of hirudotherapy may be radically different from the presented process.

Contemporary hirudotherapy uses over twenty technologies (methods) based on which the therapeutical sessions with use of medical leeches are conducted. There are also numerous methods for locating sites of leech attachment which vary depending on the type of  medical condition. Basically, they are determined by the physiological manner in which leeches are expected to operate on patient’s body in treating the particular condition. An individual choice between a general effectiveness of the therapy and the ability to leech given patient in precisely pointed site on their body, required in certain hirudotherapeutical technologies, is another important factor. The multitude of developed technologies provides the opportunity to adjust the method of treatment to individual needs and requirements of a patient while ensuring the most effective, or at least optimal, results.

Factors deciding upon the effectiveness of hirudotherapeutical session include: