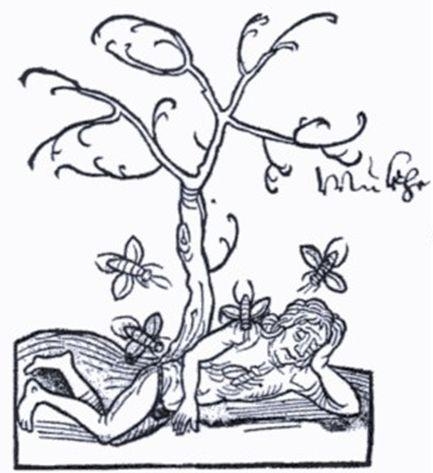 ucilia Sericata Larvae –  the history It was in 1928 when American Orthopedist William Baer of Johnsons Hopkins Hospital used the method of facultative parasite treatment to help curing four children with bone inflammation. He received good results but further attempts to proceed with this method let to failures due to tetanus bacteria infection. In the next decade however, Laderele developed a method of larvae and larvae eggs sterilization which allowed for broad scale industrial larvae cultivation. Among a group of 5750 patients treated with this methodin the following decade nobody recorded any serious side effects. Moreover, 91.2 % of patients experienced positive results. In 1940s, sulphonamides and large scale penicillin production took over the medical market and larvae treatment got pushed back from traditional medicine. Only in extreme situations, like nipple protuberance inflammation or crotch infection, larvae enjoyed some attention. Nowadays however, we reach again to treating with larvae. Such interest is due to many failures of common methods, especially due to germs rapidly building their resistance to broad spectrum of antibiotics. In the late nineties of previous century, the United Kingdom used over 4000 larvae packs in over 1300 medical center. Currently, larvae of flies are used in a number of hospitals in U.S.A. and in many European countries. In 1996, International Association of Biotherapy formed to focus on the influence of living organisms on the process of wound healing. The legal situation of larvae treatment began to gain its approval through the first decade of XXI century. In 2001, United Kingdom awarded the method of larvae usage for medical purposes as the Millennium Product, while Queen Elizabeth II awarded the team of people working on the method with prestigious entrepreneurs distinction. In 2003, American Food and Drug Administration officially allowed for treating with larvae. Finally, the legal situation of larvae treatment received a general approval: in 2004, countries of EU added them to the list of unlicensed medical product.